Thomas Klever and Gerrit Gray are happy to present "Tom and Gerrit make Noise". An amalgamation of two of the hippest young comic talents in the Christchurch scene, you're sure to have a bloody banger of a time!

Klever Tom is a master of silliness. Jokey wokes? he’s got ‘em. Loopy laments? You bet! he won 3rd place in the Grandpa Figs Fresh comedy competition 2017 and then later went on to win the hearts of all those that set eyes on him.

‘I want to Fuck Tom.’ Snap Presented by RuseWebsites

‘I have fucked Tom.’ Georgie Sivier

There you have it folks, Tom is not one to miss!

Gerrit Gray is a firecracker of a young man. Gerrit Gray was given the title of the People's hero after one special comedy performance on one regular wednesday. Gerrit Gray has taken up the mantle to fight for you. Yes you. The lazy, the regular schmuck, the regular, to let you know that you don't need talent or intelligence to succeed in this world. An exciting performer, he puts in the mahi to make sure you have a good time. Bountiful energy, a smile that could melt a glacier, a giant of a man with a Golden Retriever's joyful demeanor.

Tom and Gerrit make Noise will meld the serenading talents of Thomas Klever and the endless volcanic energy of Gerrit Gray to make for a show you won’t want to miss. Held at the Dragon’s Den on the 9th and 10th of November, Tickets are cheap as chips so make a good choice and get a couple! 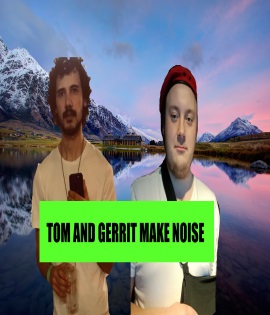